Right as the 2022 holiday season was kicking off, a powerful winter storm swept across the United States.

Keeping Sonida residents and team members safe is our top priority. Each of our communities has disaster plans in place to address any adverse events. When the forecasts began to predict a strong storm, teams at our senior living communities across the country diligently began preparations.

As the temperatures began to drop and the wind began to howl, our community leaders pulled together to ensure residents were safe and comfortable during the storm. For example, as the snow piled up due to an extreme blizzard outside The Amberleigh, an independent living, assisted living and memory care community located near Buffalo, New York, many staff members chose to live in the community for a few days so they could ensure residents would have continuous support until the storm subsided.

At other communities, some team members even chose to miss holiday celebrations with family and friends to brave the storm and stay with residents.

While many stories of dedicated team members came out of the storm, we wanted to share two stories of how our team members banded together during the storm to keep our facilities running and our residents safe.

In the early morning of December 26, John Hoenemeyer, executive director of The Waterford at Fairfield, became aware of ceiling tiles falling to the ground in the rear of the kitchen, as well as the break room adjacent to the kitchen.

He discovered that water pouring from a pipe somewhere above the ceiling was causing the ceiling tiles to fall.

Knowing how vital the kitchen is to ensure residents can enjoy three hot meals each day, Hoenmeyer and his team quickly began to troubleshoot the situation and make repairs.

“Our maintenance director immediately shut the water off to stop any further deluge. Maintenance, housekeeping, transportation, dining services and administration personnel pitched in to remove all the items in the affected areas. We worked in unison to get the kitchen back to operational status. The only item that prevented us from serving a hot lunch was that the plumbers did not arrive until early afternoon. I am extremely proud of the way our team ‘circled the wagons’ and rose to the occasion.”

The Waterford at Ironbridge’s main lobby flooded in the early afternoon on Christmas Eve. Staff who were onsite that day immediately jumped in to help the fire department squeegee water out of the lobby, library and offices.

On the same day in the late afternoon, Kelly Snyder, executive director, was informed that an apartment had a leak.

“It was like a waterfall as the fire suppression system failed,” Snyder says. “We ended with 10 apartments flooded and 10 residents displaced on Christmas Eve.”

The team worked to find accommodations for these residents. Four went home with families while the other six were moved into the community’s staged apartments. “We had everyone completely resituated in new apartments by the end of the week.”

Because of the leaks, the community’s emergency pendant system was not functioning.

Saving the day, Emily Christopher, the sales director, gathered up her children and raced to stores before they closed for the holiday to gather whistles and bells that residents could use as a makeshift alarm system until repairs could be made. Emily and other team members also picked up water to distribute to residents and supplies like mops and buckets to combat flooding.

“The result was an exceptional night full of teamwork and laughter as the team came together to navigate through the obstacles presented by the storm.”

Thank you to our residents for their patience while our teams work through these issues. We are so grateful for our team members’ unyielding commitment!

Learn more about a community near you 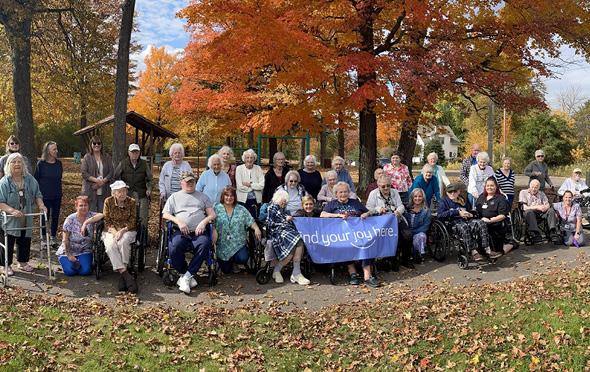 We want to take a moment to express our gratitude to our team members and residents across the country.